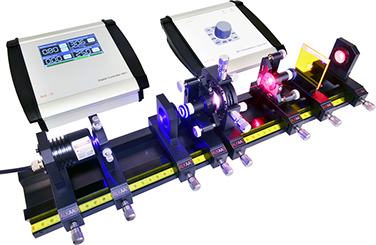 Due to the steadily increasing demand of the multimedia applications powerful RGB (red green blue) light sources came into the focus of industrial research. Along this road the Praseodymium laser has been reinvented again since this material has the potential to emit directly visible laser radiation on many interesting wavelength. Whereas in the past this material has been of more scientific interest it is nowadays considered as a noteworthy candidate for RGB applications. The recent new developments of compact Pr:YLF laser have been enabled due to the presence of powerful blue emitting laser diodes. Such blue laser diodes actually have been developed for the powerful RGB data projectors. The aim of the experimental laser diode pumped Praseodymium YLF laser is to demonstrate these great potential as well as the exciting effect to study a four level laser system with visible radiation.

The radiation of the blue emitting laser diode is collimated by the collimator which is a high precision aspheric lens with a short focal length and a high numerical aperture. The resulting beam is parallel in one axis showing a more or less rectangular to elliptical intensity cross section. A focusing lens is used to focus the blue pump laser radiation into the Praseodymium doped YLF (Pr:YLF)crystal which is coated with a broadband anti reflection coating on both sides, so called ARB coating. The wavelength range for lowest reflection covers the entire emission range of the Pr:YLF material including the pump radiation at 445 nm. The optical cavity is formed by a flat mirror on the pump side and a curved mirror at the other cavity side.

The setup is designed in such a way that all components are accessible and can freely arranged on the optical rail. The measurement starts with the characterisation of the blue laser diode which is connected to a digital controller allowing the settings of the injection current and temperature. In a next step the polarisation dependent absorption is measured. The Pr:YLF crystal is set into a mount which is inserted into a to a 4 axis kinematic mount allowing the crystal to be rotated around its axis. As soon as the crystal is exposed to the blue radiation of the laser diode a bright white fluorescence appears. By means of an optional spectrum analyser the emission lines are identified. By using the modulation capability of the controller the lifetime of the excited state is measured and related to the Einstein coefficient for spontaneous emission. The most excited moment comes, when the laser cavity around the Pr:YLF crystal is setup. Due to the high gain laser oscillation is obtained quite easy resulting in a strong red emission at 640 nm. To obtain laser oscillation also on other than the red line either a Littrow prism or birefringent tuner is used. Furthermore the generation of UV radiation with a wavelength of 320 nm as result of the intra cavity frequency doubling of the 640 nm line using a BBO crystal shows the great potential of such a laser system.